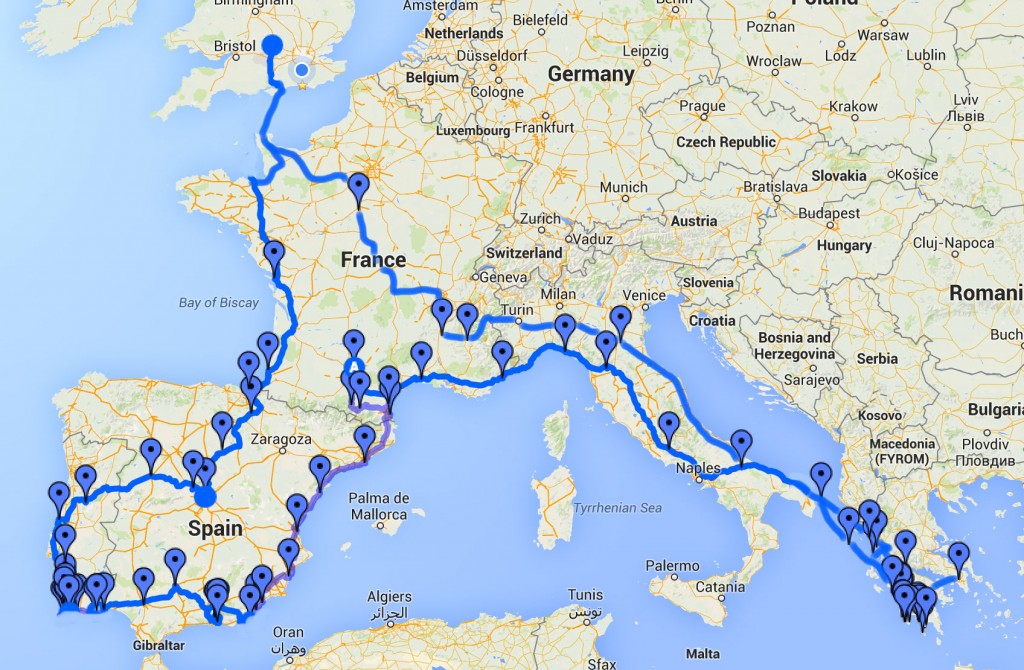 Having finished converting my beloved Hanomag Henschel from it’s motor-cross van status to a live in vehicle complete with fridge, cooker, shower, double bed and twin swivelling aircraft seats in the front my girlfriend Helen and I were ready to embark on the journey of a lifetime round Europe for 5 months. At the ages of 27 and 25 it was long overdue that we moved out of my parents’ house so the idea was to find ourselves and come back to a bright career future…

From Oxford we headed due south (until we hit Madrid as it happened!) to board the Portsmouth – St Malo overnight ferry. We were snapped on the way in. The photo stands as a great memory of the trip. 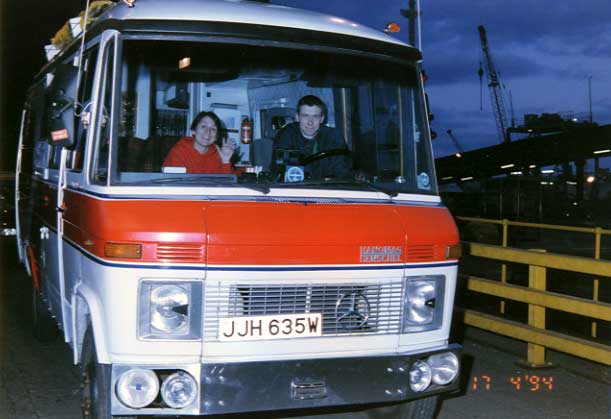 It was a leisurely start to our plunge south. We stopped at Mont St Michel before heading down to the south of Brittany and pulling on to La Rochelle docks. We parked next to another camper and spoke briefly to them about sleeping over right there on the docks. They did, so we did too. It was our first night and we loved it. It was a cold night but we wrapped up. Here we are the next morning. 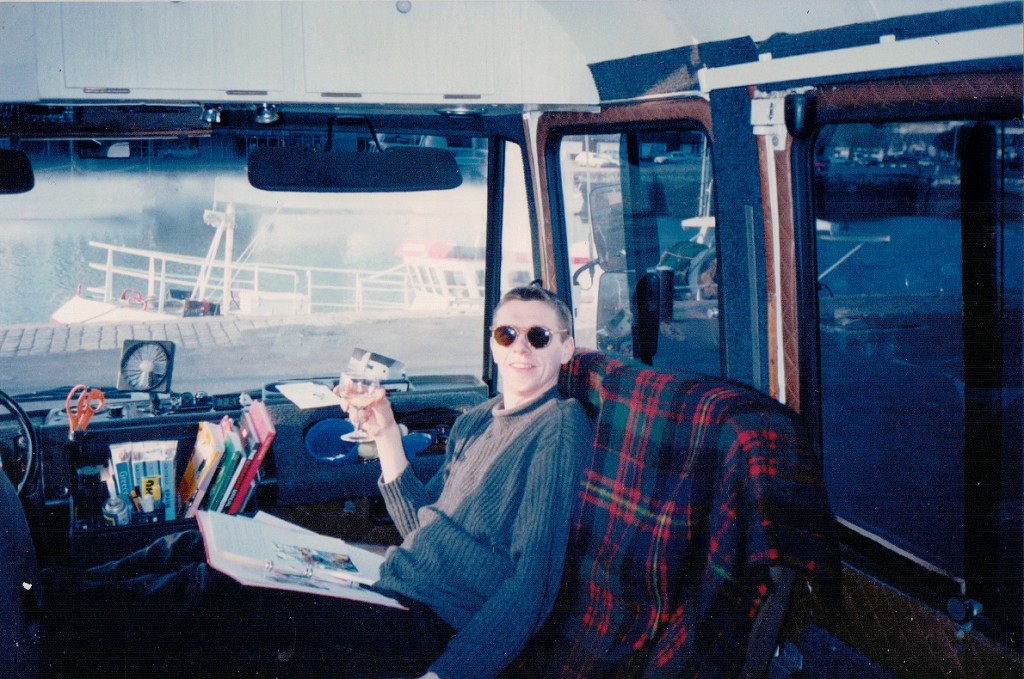 The author enjoys his first taste of campervan freedom!

We hit a very boring road south towards the border stopping just north of Hossegor before heading on over the border and winding up into the Spanish hills along the coast before we plunged inland. 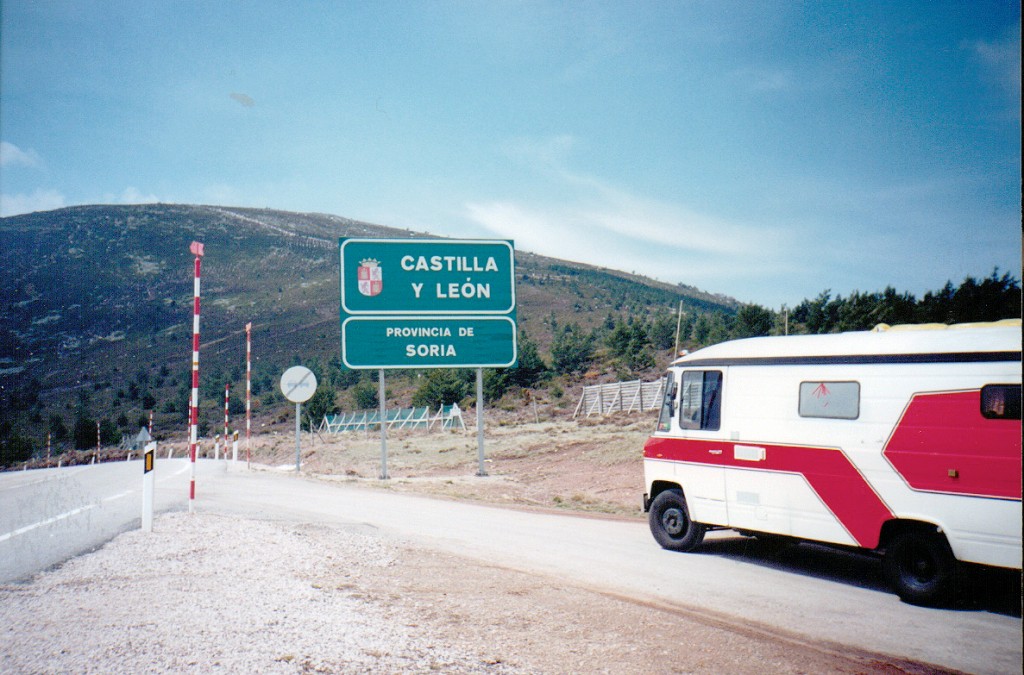 The journey south from here takes you inevitably through the mountains of Pais Vasco and our first taste of clean thinner air and low gears. JJ pulled well but we had to take a lot of care with her wait downhill. 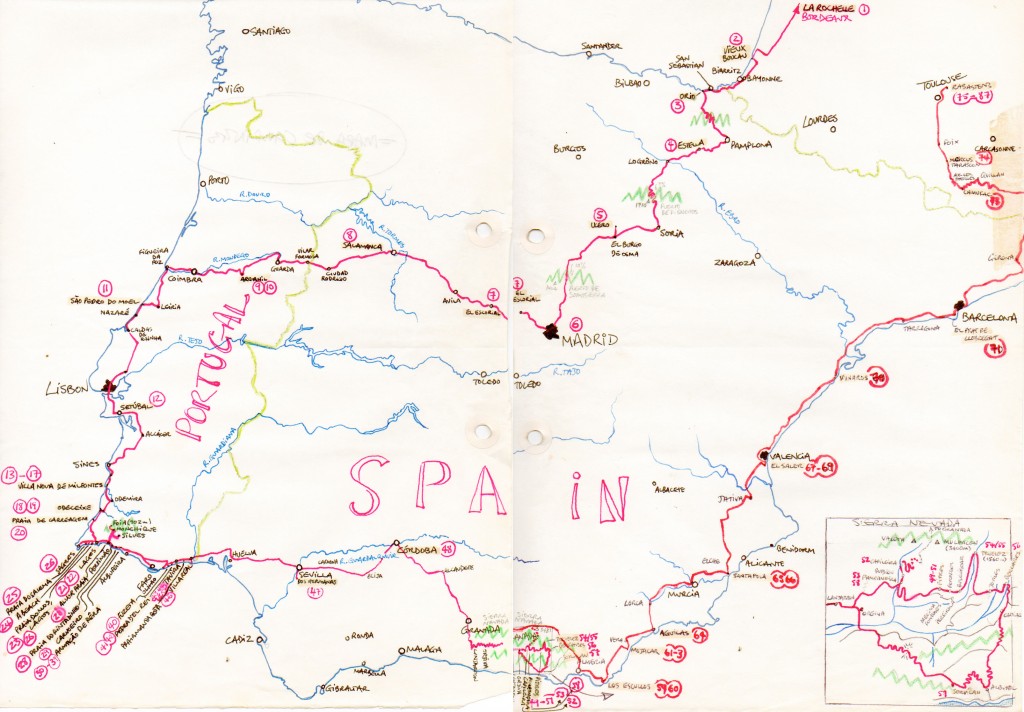 We stayed in the streets of Madrid and woke on the morning of the Madrid marathon and enjoyed tapas and museums before heading due west for the first time. After a wonderful stop in Salamanca to see the incredible Plaza Mayor we crossed into Portugal and bumped along much rougher roads into a rural campsite in Arganil which gave us our first taste of a proper touring campsite complete with several Dutch campers who were seemingly prolific wherever we went. 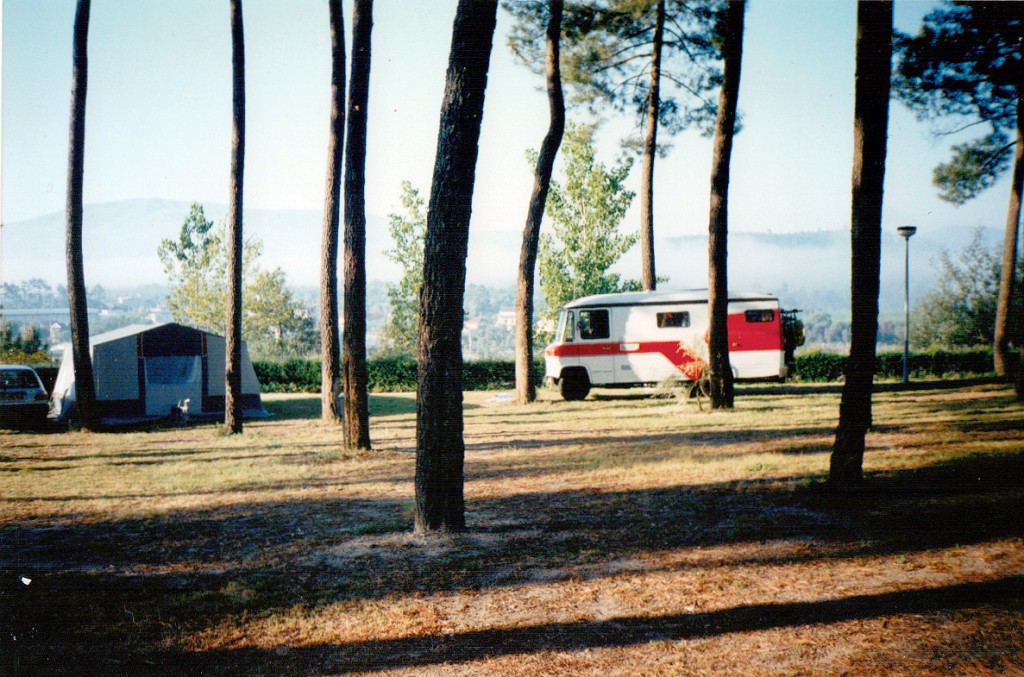 We hit the coast at Sao Pedro do Moel and turned south again dropping down through Nazare, plunging through Lisbon, and stopping at a mosquito infested site in the Parque de Gambia near Setubal before spending some wonderful more leisurely nights in what was to become one of our favourite parts of Europe – the remote and unspoilt Alentejo coast.

After 4 nights on a campsite at Villa Nova de Milfontes we were ready to get a little wilder and spent one night alongside the mouth of the estuary at the remote but stunning Odeceixe gorge before driving round and up onto the cliff-side village on the other side of the estuary for a windswept second night where we were lulled off by the sound of the crashing Atlantic way below us. 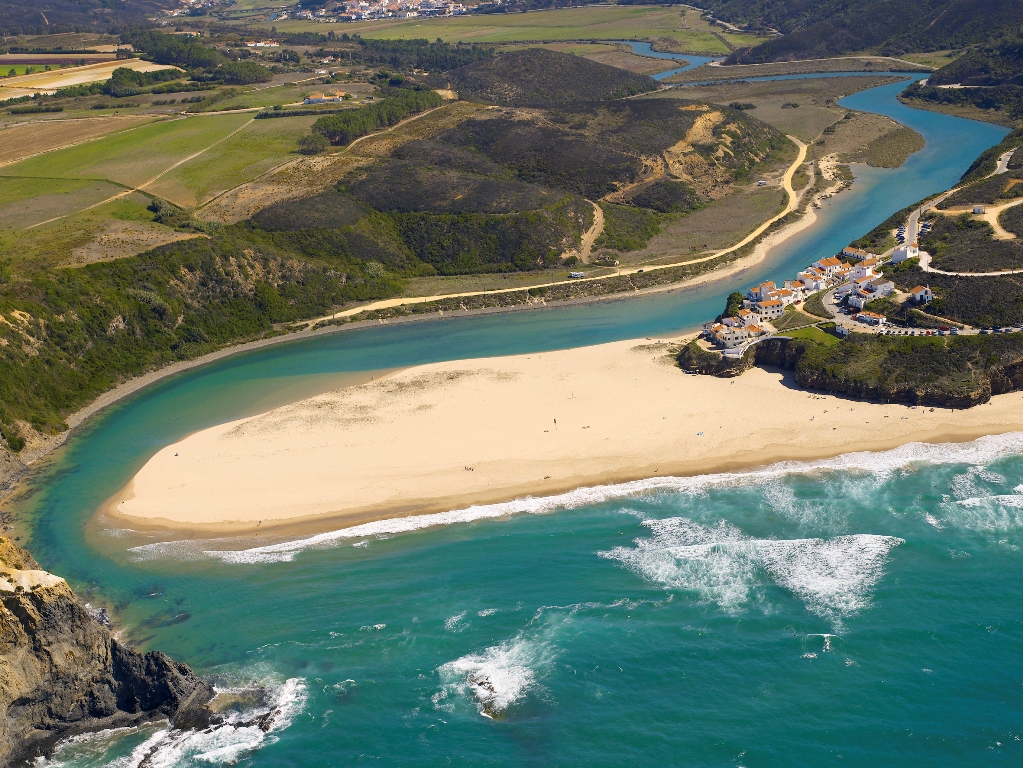 This part of the coastline is sparse but there are some real jems, and it’s a great destination for surfers but you often have to trek along dirt tracks to find the best bays. We did just that, even with our hulking Merc camper, ending up at the beautiful large & windswept Praia do Carriagem before heading for the Algarve coast.

We spend a total of 3 weeks along the unspoilt east and west end of the Algarve coast with a brief sojourn inland to the spa town of Monchique. Apart from the numerous little bays and coves where we could park up and stay on the beach for free Portugal also represented pretty much the best value of the trip. We managed to spend a week here (and one in Greece) living off just a few pounds on well-planned market shopping. Favourite spots were Burgau & Salema beach in the west and Tavira in the east (where we managed to flatten the van batteries and had to camp in the centre of town). 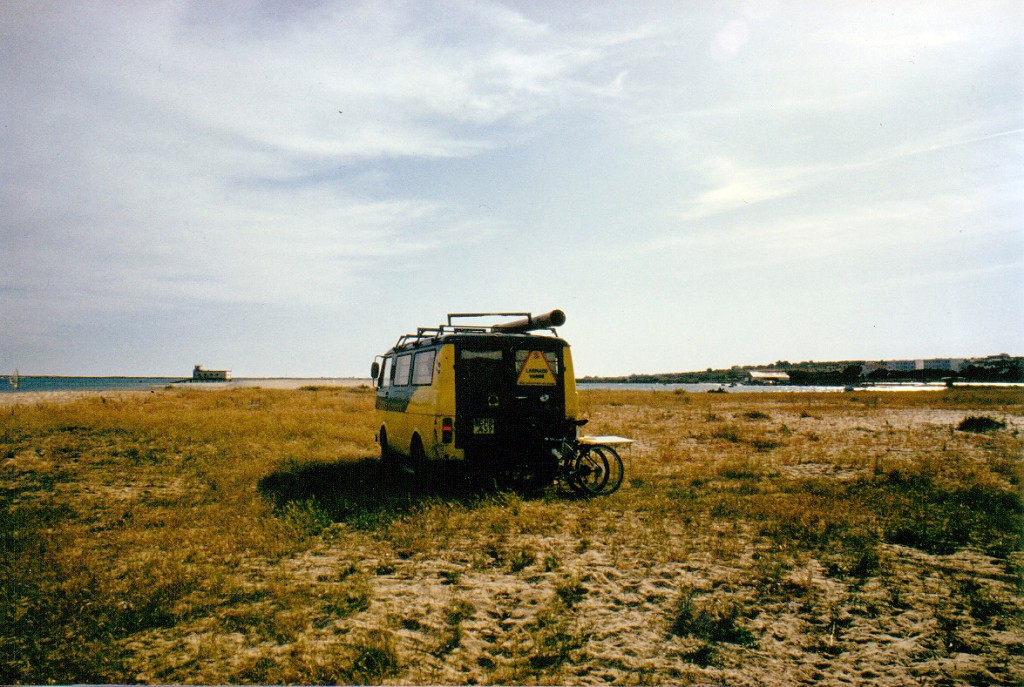 We crossed back west through Spain visiting beautiful Seville (where we were robbed in a supermarket car park), ancient Cordoba, and then on down through Granada to the Sierra Nevada mountains and Las Alpujarras and on up into those cool clear hills.

Whether it was the fact that they were at the end of a long hot drive through the saucepan of Europe or just that they are simply incredible, impossible habitations, the lovely whitewashed pueblos of this part of Europe have become a life-long favourite. 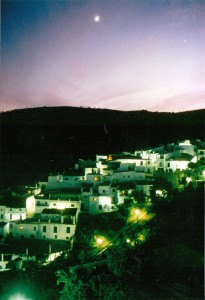 Other than a 3 night break at a recommendable campsite in Pitres we spent the rest of our 10 nights here parked discretely in village squares or at the side of quiet roads overlooking pretty twinkling villages at dusk and incredible views across the 100 mile width of the Mediterranean to the northern shores of Africa.

I was fascinated by the fact that you could rive up and over the Sierra Nevada mountains just past the second highest peak of Valeta and on down to Granada. This, the highest road in Europe, was still open back then, and on one cycle ride up the track from Capilleira (the 2nd highest village in Europe, and from where the camper had had to stop just a few miles up an increasingly poor track) I was delighted to see, as I rode on up into thick cloud cover, a 4×4 bounding by, lights on, CB antenna waving, occupants grinning, as the headed down to conclude their travers across the range. I vowed to do this one day but may now no longer get the chance (see my later article on my 4×4 honeymoon adventures round Europe).

Mojacar & the east coast of Spain

From The Sierras we drove due east (avoiding the ghastly poly-tunnel clad strip of the Costa Del Sol) through the well known spaghetti western deserts around Murcia and on to the coast at Mojacar where we had to strap up our exhaust pipe with an old tin can and some twisted metal coat hangers (always have metal coat hangers handy!). Then, in a weeks’ dash to get north and head towards a family get together at a villa my folks had hired for a summer holiday for us all to descend on we pressed on, only stopping for more than 2 nights at Valencia.

Once in France we had one night on the shores of a lake at Leucate before heading inland on the Cathar castle route to the Plateau de Sault where we camped in the Pyrenean foothills, again vowing to return.

The 2 week break with my parents smack in the middle of this 5 month trip was sheer luxury, and it was wonderful to see the rest of the family, eat well, spend hours in a lovely pool, and recharge ready for the second leg.

After our holiday in a holiday at Rabastens, just north of Toulouse we pretty much drove straight to Greece! Stopping in car parks at Aigues Mortes, Antibes and then 4 different service stations on the Italian autostradas. This wasn’t the best experience but we needed to keep plunging on south at our 60 mph top speed. 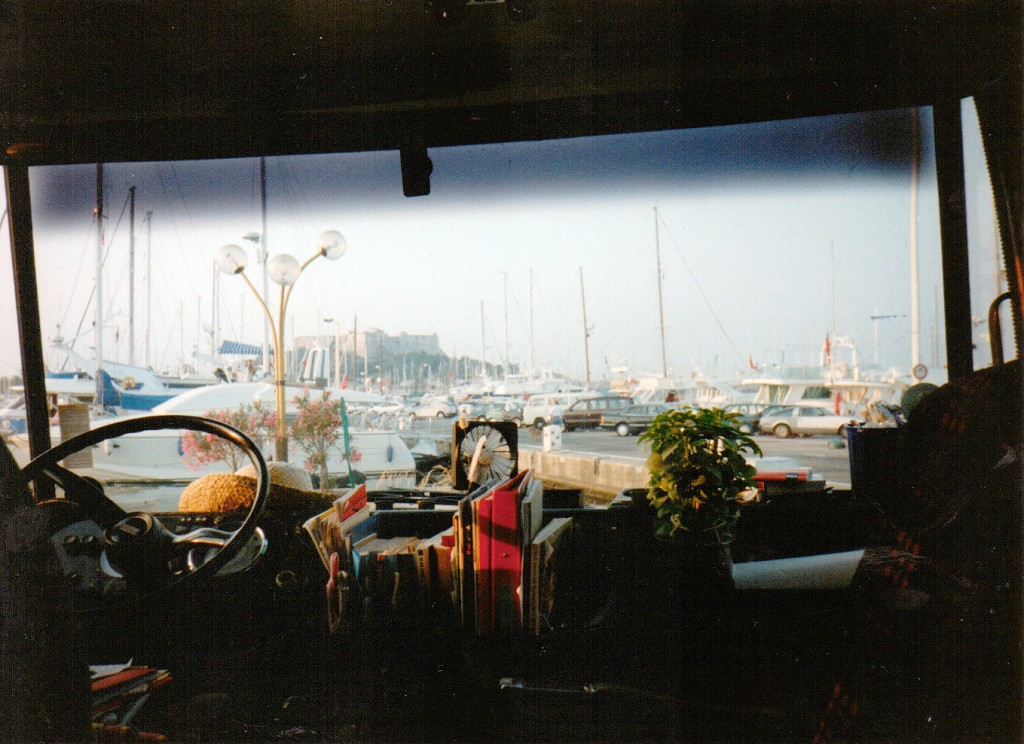 Thankfully we managed to board the fantastic Brinidisi to Igoumenitsa ferry promptly, a journey I have made a loved several times before as a back packer on my mid-80’s interrailing holidays. This time we backed our big old jalopy onto the big old Yugoslavian run ferry and fell into a deep sleep up on the deck (as is tradition). 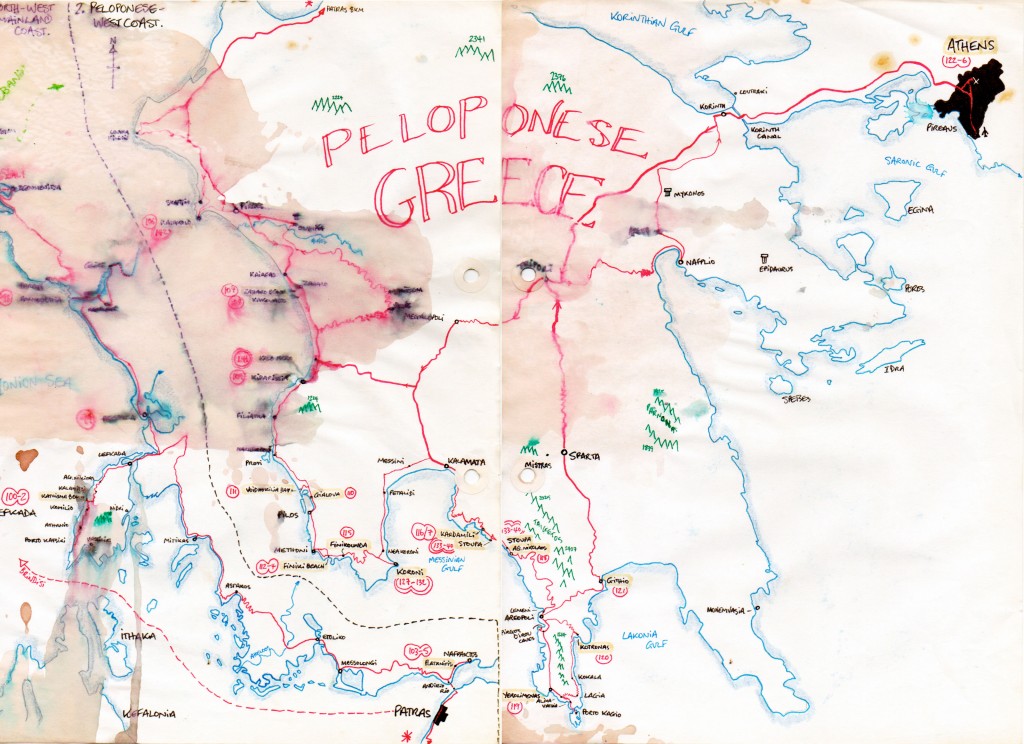 Our final destination country on this road voyage, Greece for us has always been a dose of welcome holiday freedom. My brother Clive has lived and worked in Athens for many years and to be able to drive up to his apartment was always a secret goal of the trip. For now however we needed rest and recuperation after our bone shaking shclep the length of Italy.

We found it not far from this northern port of mainland Greece, at Ammoudhia, where we were amazed to see a queue of other motorhomes pulling into a disused campsite literally along the front of this sleepy little town for a free stay with a sea view! 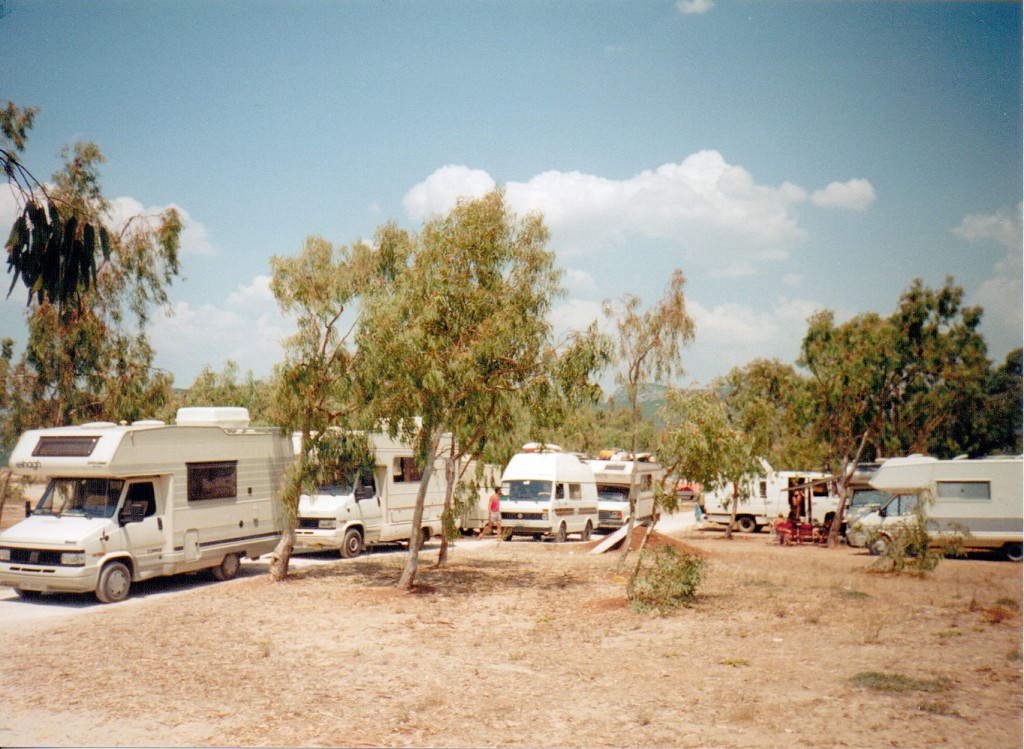 We drove south hugging the coast stopping overnight on the bustling quay at Prevezza and admiring the passagiata before crossing over onto Lefkas and having another amazing free beach camping experience at Kathisma beach. The water here was mercurial, and the skies so unbelievably clear that we enjoyed the Milky Way and shooting stars every night.

We crossed over to the Peloponnese which was to host us for the rest of our time away. This beautiful barren land is perfect for touring in a campervan. At Patras we had a new exhaust fitted, pretty much on the spot as well. The tine can patch had lasted us the trip round from the south of Spain fine, but this guy knew exactly what to do and had the time to do it (for little cost as well). 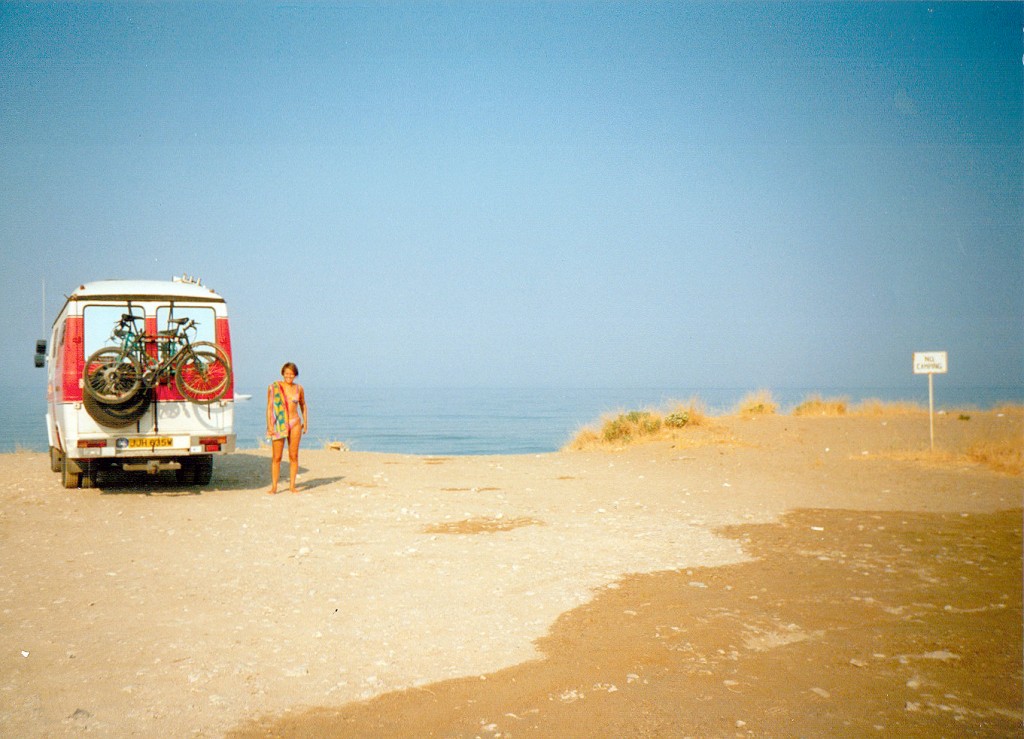 We stayed on the docks at Katakolo and watched the cruisers shuttle coach loads of people inland to Olympia (here it was 45 degress by 930 in the morning!); we stayed on the west coast beaches of Zacharo & Kokovatos, we camped in the campsite at Kiparissia, on the shores of the inlets at Gialova & Voidokilia, and had 3 blissful nights on the south coastal Finiki beach with a dozen other wild campers (this was to be another week of minimal cost). 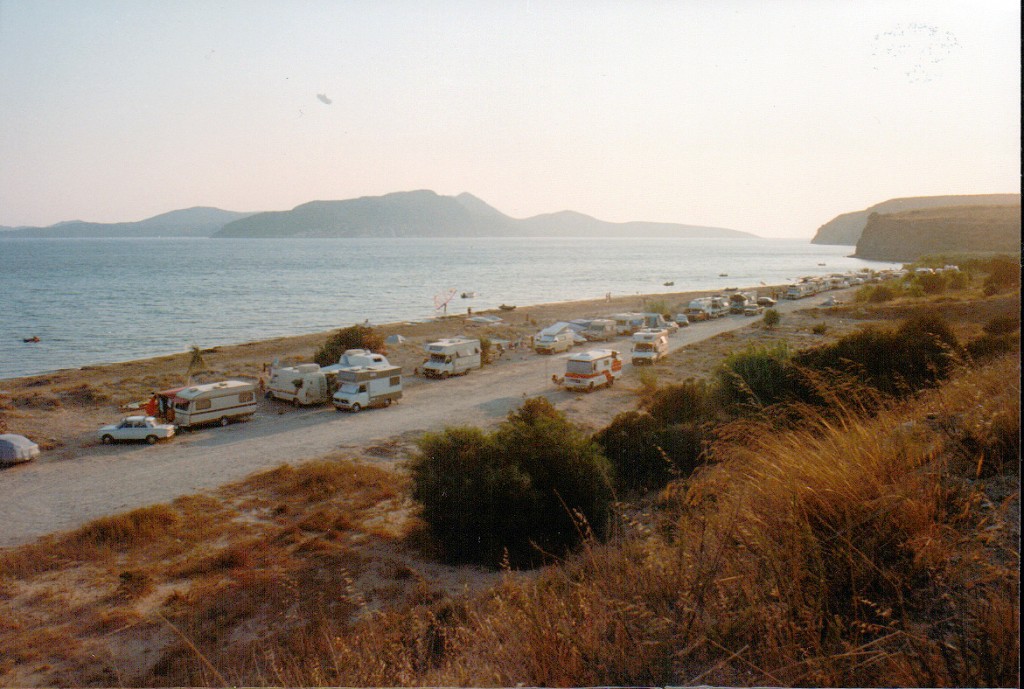 We then drove on round to the middle finger of the southern Peloponese, starting to scout for suitable destinations to camp with the friends that we knew were flying out to join us for their 2 week summer holidays, and fell in love with this remote, barren, sun-kissed land with such enchanting crystal clear waters as we found in the little horseshoe bay of Stoupa just south of the equally picturesque Kardamili. At Stoups fresh water fonts spout forth under the bay making a dip here even more refreshing. 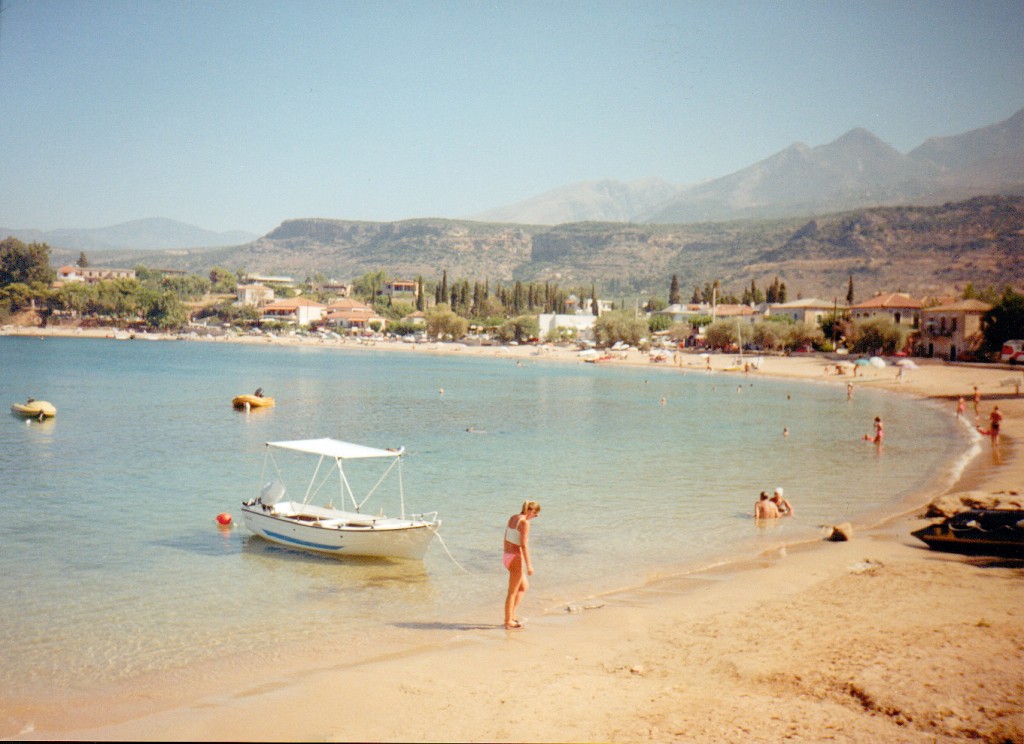 It turned out that we followed several other vans round this finger of land, heading right down to the end-of-the-earth village of Gerolimenas, and round the cape fabled to house the gates to Hades, just south of Porto Kagio. It was still bakingly hot. Without or weeks of the heat wave that we later found out we were enduring would have been unbearable – we often slept outside. 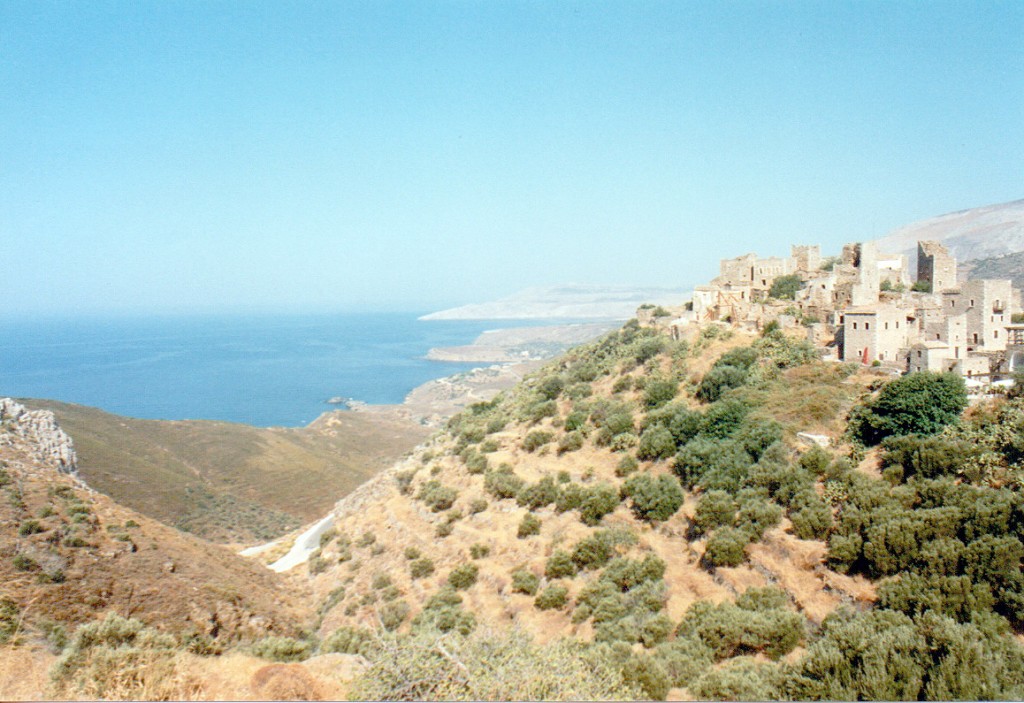 We made it to my brothers apartment in Nea Philadelphia, northern Athens and had some decent r n r before the drive to the airport to greet our friends. 9 of us trundled back down to the Peloponese in the van with no noticeable performance difference! We camped at Camping Koroni on the east side of the Messinian finger for a week and had a second blissful week back in Stoupa at Camping Kalogria.

We bid our friends farewell at Kalamata and headed for home. It was a heck of a trek. We did the Patras-brindisi crossing (should have sailed all the way to Venice as I’d done before but felt we couldn’t afford it), drove all the way to Bologna in one stint on the autostrada from the heel, crossed through the alps loosing one of the front breaks in the process, stopped at a friends house for one night in the Drome, one night near Orleans, and then home.

A once in a lifetime trip was over. Take it from me – if you have the chance or an inkling of wanting to do something similar – DO IT! There’s nothing like a road trip to help you get perspective while travelling, and having your home on your back just opens up so many possibilities. Happy days ☺